SCRIBBLES of Suze
A showcase of undergraduate assessment items,
or, the wild ramblings of a lunatic.....either one works.

One of the biggest issues noted in autism is the cognitive issue of theory of mind, the lack of which is noted as mind blindness. This then leads to impairment in social and communication skills, and inability to comprehend inner thoughts about themselves and others (Baron-Cohen & Joliffe, 1997, as cited in Attwood, 2004).

Many people with ASD are well aware of their social awkwardness, which can lead to social avoidance, stress, and especially anxiety, which is prevalent in adolescents with ASD (White, Oswald, Ollendick & Scahill, 2009). Feelings of anxiety, along with other negative emotions such as anger, often result in negative internal thoughts about themselves and others . Like a vicious circle, due to the lack of theory of mind and suitable communication skills, these negative thoughts about others can then become poisonous, and if not dealt with appropriately, may give cause to act on these feelings inappropriately. K has already had many incidents where his negative internal thoughts have gotten him into trouble, by speaking out harshly or acting out physically.

Attwood (2004), discusses an ‘emotional toolbox of thinking tools’, used to help children with ASD to help solve their inner negative emotions, by challenging their thinking and restructuring these distorted beliefs. This concept is similar to Narrative Therapy (Wark, 2012), a remoulding of internal conversations and perceptions, as well as Cognitive Behaviour Therapy (Ehrenreich-May, et al., 2014), although neither method provides enough evidence yet about success with people with ASD. 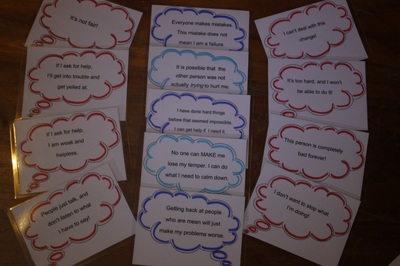 The larger thought-bubble cards, showing some of the red poison and blue antidote thoughts. 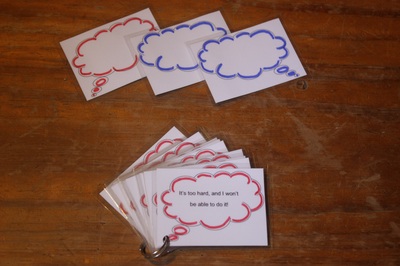 The pocket-sized cards, showing the red poison thought side, plus the blank spares. 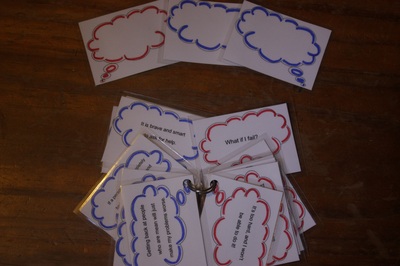 The pocket-sized cards, showing both sides of the cards.
The thought-bubble cards are based on the ‘poison and antidote thoughts’ discussed by Attwood (2004). The dialogue featured on the cards is taken from a working example by Shaul (2012). This dialogue was discussed with K, and the examples shown were chosen by him as indicative of the inner dialogue that he contends with on a daily basis. The answers were chosen likewise, and adapted where needed to suit the user. The red 'poison thoughts' represent the negative inner thoughts that K has under stress, and the blue 'antidote thoughts' are to help reinforce a more positive thought pattern.

The cards have been created from laminated A4 paper in two forms, a larger desktop version to be used in a classroom, and a smaller, more discreet form that can be kept in one’s pocket for ready reference. This was chosen to comply with K’s desire to avoid more obvious visual supports, which may be seen as immature by his peers. The portability of the small cards also helps K to look at them more easily and more often when needed.  There are also blank cards which can be filled in and added to the set, as other internal thoughts are identified.